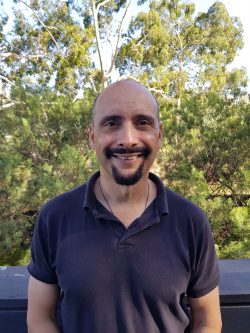 Fr Sacha Bermudez-Goldman joined the Society of Jesus in February 1999.

He holds an undergraduate degree and Masters in Engineering in Texas and worked as an engineer for a few years.  He then joined an American missionary society and served as a lay missionary teacher for seven years in Tanzania (East Africa) and Cambodia.

During his first year after ordination, Fr Sacha was involved in Magis, the Ignatian Young Adult Ministry as Victoria coordinator and the Magis08 program for World Youth Day.

He was director of Jesuit Refugee Service (JRS) Australia from August of 2008 until February 2011. After doing Tertianship (a 7-month Jesuit renewal program) in Salamanca, Spain, Sacha moved to Madrid and completed a Licentiate in Spiritual Theology in 2014.

He returned to Melbourne as superior of the Jesuit Community at Campion House and member of the Centre of Ignatian Spirituality. He completed his Doctorate in Spiritual Theology in 2019 while living at Newman College, where he has been one of the Jesuit chaplains since 2017.

He is currently a seasonal lecturer at the Australian Catholic University (ACU) and the Jesuit Provincial’s Assistant for Young Adult Ministry in Australia.

Fr Sacha Bermudez-Goldman SJ has been a JRS Australia Board Member since September 2022.