The evolution of JRS Australia – Celebrating 40 years of JRS

This is the second in a series of reflections to acknowledge Jesuit Refugee Service’s (JRS) 40th Anniversary. This article features in our latest Easter edition of LINK, the quarterly newsletter of JRS Australia. Please click here to read the full PDF.

JRS celebrated our 40th Anniversary late last year. After the end of the Vietnam War in 1975, hundreds of thousands of South Vietnamese fled their homes, setting out in overcrowded boats across the South China Sea. Many did not survive the journey. Some were killed by pirates. Others drowned at sea. 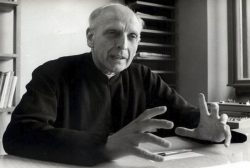 Fr Pedro Arrupe SJ (pictured right), the then Superior General of the Society of Jesus, called on the Jesuits “to bring at least some relief to such a tragic situation.” Jesuits around the world rallied, and JRS was born in November 1980.

JRS has since grown to respond to the ever-increasing numbers of forcibly displaced peoples worldwide, and attempt to meet their needs and aspirations.

Today JRS has operations in 57 countries, including in Syria, Afghanistan, Myanmar, Colombia, Mexico, and Indonesia.

Each nation has its own unique story of how its JRS country office has sought to fulfill our mission to accompany, serve and advocate for the rights of forcibly displaced people.

At JRS Australia, our approach is framed by the notion that “the refugees are our teachers.”

This is a mindset that Fr Mark Raper SJ, president of the Jesuit Conference of Asia Pacific, says is shared by all associated with JRS. It is a mindset that ensures JRS maintains a closeness to the people and communities we serve. Indeed, our priorities in service, accompaniment, and advocacy are informed by the people we serve – our teachers.

JRS Australia has existed for approximately fifteen years in an official capacity as an NGO. But, JRS operated in some shape or form in Australia long before that. Sr Patricia Pak Poy rsm AM of the Sisters of Mercy remembers the work of the Australian Jesuits in assisting refugees from Indochina in the 1970s. Sr. Patricia writes:

“In 1975 with the fall of Saigon thousands of refugees from Vietnam fled to the camps and the issue had been taken up by the Asian Bureau Australia (ABA) founded [in 1973] by the Australian Jesuits — Peter Dwyer, Mark Raper and Michael Kelly and others…ABA was there moving on the refugee concerns when Fr Arrupe called on the society to put itself very deliberately at the service of refugees and displaced peoples.”

In 2007, JRS Australia established the Shelter Project. As the years progressed, Arrupe’s vision of a ‘short term’ JRS project evaporated, and in Australia, like elsewhere, operations expanded. JRS Australia has established a range of projects since those early days. One such project was the ‘Blaiket Shelter’ located at St. Canice’s in Potts Point. For thirteen years, ‘Blaiket’ (2007-20) housed men seeking asylum. Anne Porter, JRS’ long-serving volunteer (pictured), recalls the tremendous diversity of the men served and accompanied at this space during their stay. Anne writes:

“Blaiket housed men from about twenty five countries including Tibetan monks, doctors, labourers, engineers, a High Court Judge and an Iranian weightlifter airlifted from Manus Island. Extroverts who loved chatting lived in the residence, along with incredibly shy and troubled young men who found it hard to share their thoughts and to share a room also calling Blaiket home.” 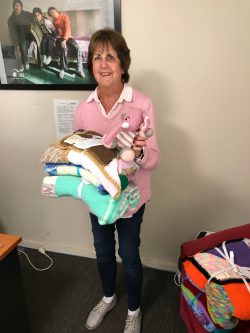 In 2014, Sister Margaret Guy RSC, was asked by JRS Australia’s then-Director,  Fr Aloysious Mowe S.J., to be part of a new JRS drop-in hospitality centre in Western Sydney to serve and accompany people seeking asylum. The space came to be referred to as “Arrupe Place,” in honour of JRS’ founder.

Pictured below: In COVID, JRS’ volunteers continue to assist in providing critical support to people living in Sydney, and their families. Image credit: Flashpoint Labs. 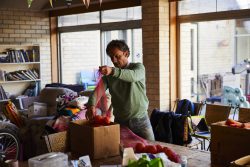 But as we reflect on JRS’ operations in Australia over the last four decades, there is much to be grateful for.

Forty years ago, when Arrupe came up with his original vision, it was with a faith in humanity. Arrupe believed JRS would be supported in its work in “collaboration of many lay people who work with us.”

This has been the story of JRS Australia. Whilst the elected federal government chose to exclude all people seeking asylum from its COVID packages, the broader community chose to welcome, protect, promote, and integrate those in dire need. With you beside us, and the refugees as our teachers, and as leaders, JRS Australia continues to evolve to accompany, serve, and advocate for the rights of forcibly displaced people.

To receive our publications & reports in by mail, please email: jrsreception@jrs.org.au with your name and address. To join our online newsletter for regular updates, simply click here.